The South 101: Everything You Should Know About Banana Pudding

Write a blog post, they say.
Make it connected to your new book's characters.
Make it captivating.

Okay. Nothing is more captivating than the words "banana" and "pudding" together.

There may be controversy about a few things in The South, but we are in complete accord about banana pudding. Your Aunt Mary Nell brings it to every gathering. Your relations muster some whenever a family has someone in the hospital or loses a loved one.

And in IT ALL COMES BACK TO YOU, Violet and Ronni both adore it. That may not be mentioned in the book, but they do. Trust me, it's a foregone conclusion.

There are people who will tell you banana pudding originated in the North. Those people are lying. Now it's true, they had bananas when bananas were a luxury for Southerners, but they did unspeakable things with them. Like this.


In 1921, (we refer to this as "The Industrial Wafer Revolution"), a Mrs. Kerley in Indiana or Illinois or one of those I-states contributed a recipe for a banana pudding with Vanilla Wafers to a newspaper, while a Mrs. Smith invented a banana pudding with Vanilla Wafers for the Atlanta Women's Club cookbook, Pastries, Puddings, and Dumplings. And that is a cookbook title after my own heart.


Anyway, in the 1940s The National Biscuit Company (apparently the U.S. was still British enough to call what are clearly cookies "biscuits") published the now-classic recipe on the side of its Vanilla Wafers box, the whole shebang, with one metric ton of wafers, a creamy custard to cradle the bananas lovingly, and a meringue slathered all over the top. Serve it hot or cold. Earn the eternal affection of your family.


This is how it's done, folks, and I guarantee you, Violet would've eaten plenty of this in 1940s Alabama and Ronni is still eating it somewhere.

As for me, I'm a heretic. I like my banana pudding the way my mom and my daughter prepare it (you notice I'm not doing the heavy lifting here): not baked, with chilled pudding.


Here is the most fabulously exciting part of this blog post...my friend Marianne and I are going to the NATIONAL BANANA PUDDING FESTIVAL next month. Yes, this is a thing. Be very jealous, because they have a Puddin' Path, this glorious gift from God where you pay $5 and taste a plethora of pudding.

None of these flavors are heretical. They would only be heretical in an I-state (just kidding, y'all).

I fully expect to see some version of Ronni there, and I know Violet will be at the banana pudding festival in spirit. She'd have loved it, and probably would've been crowned Puddin' Princess (I made that up, but they should have one).

You can follow this link to the Puddin' Path

Meet Violet and Ronni here, in IT ALL COMES BACK TO YOU (click the pic) 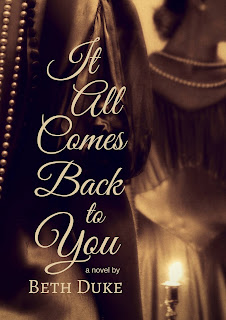 Posted by Beth Duke, Author of Delaney's People, Don't Shoot Your Mule, It All Comes Back to You, and Tapestry at Wednesday, September 05, 2018

Email ThisBlogThis!Share to TwitterShare to FacebookShare to Pinterest
Labels: alabama, banana pudding, beth duke, it all comes back to you, national banana pudding festival, ronni, The South, violet