A Feather's Not a Bird

I'm going down to Florence, gonna wear a pretty dress

I'll sit on top the magic wall with the voices in my head
Then we'll drive on through to Memphis, past the strongest shores
And on to Arkansas just to touch the crumbled soul

- Rosanne Cash, "A Feather's Not a Bird"

Johnny Cash's daughter wrote at least part of that song sitting where I did yesterday, in Tom Hendrix's driveway. We were surrounded by one of the most astonishing things I've ever seen—several million pounds of rock formed into an eternal memorial to Tom's great-great-grandmother.

And it's easy to see why. No one could visit Tom's Wall without being profoundly moved. I cried more than once listening to him tell Te-lah-nay's story. She was a Yuchi Indian, an eighteen-year-old forced from her home to walk the Trail of Tears to what we now know as Oklahoma. And Te-lah-nay did what no other of the thousands who were brutally "relocated" managed.

She walked back to Florence, Alabama. It took her five years to reach the place where the woman in the river sang to her, where she could be at peace, where she belonged.

She was a medicine woman who boiled willow bark for "head trouble." Her journal is probably the most precious thing Tom owns. He grew up listening to his grandmother tell the stories of Te-lah-nay's life and to the song of the river. He knew he had to do something to honor her memory.

He was talking to an elder in the Yuchi Tribe about it when he was told, "All things shall pass. Only the stones will remain."

So Tom did what pretty much no one else could imagine doing: he spent thirty-five years of his life constructing a wall of Tennesee River rocks. Thousands and thousands of them. One for each step his great-great-grandmother took to and from Oklahoma.

People call it a "magic wall" and I guess that's right.

Florence, Alabama is a beautiful city on the mighty Tennessee River. Stately homes dot the bluffs high above the water. The University of North Alabama sits on the edge of a vibrant downtown where college kids chase Pokemon and meet for pizza and beer. Upscale shops and fancy restaurants are all around if you can afford more than Ramen Noodles. I loved staying there.

But miles away from all that, bounded by deceased corn stalks and masses of leafy vegetable crops I couldn't identify, I found what is officially known as the Wichahpi Commemorative Stone Wall. It beckoned from a lot heavily shaded by trees that have seen hundreds of years.

Much better though, I found Tom Hendrix.

Tom's eighty-seven. His voice is gentle but commanding, each syllable carefully enunciated in an educated and clear manner. His eyes and cheekbones testify to his Yuchi heritage. He almost never pauses—the man is a born storyteller—and he's one of those people who clearly love people. It was a huge privilege to have him to myself for an hour.

We almost lost him. He was in a bad car accident recently and is obviously still in pain. That doesn't dim his enthusiasm for his massive project and the ancestor he honors one bit.

It's a woman's place, he told me. The wall and its benches and small amphitheater and prayer circle are all about the spirits of grandmothers, mothers and daughters. There's a special section that evokes grandmothers and I cried when I saw it, remembering my own.

It's a strangely peaceful and calm, tranquil spot. Even on an Alabama August day, the trees provided cool shade and I walked the length of the wall, trailing my fingers here and there on its surface and feeling generations of love and memory.

People all over the world know about Tom and his wall. They send special rocks to be carefully placed in a section he set aside for them. One looks like a glittery "girl whale." One is said to be a source of fertility. He put it in a place it can't be accidentally touched, and he swears a forty-nine year old woman held it and delivered a baby a year later. Fossilized wood, mastodon teeth and a turtle. There's a meteorite he had me pick up, small and unbelievably heavy.

But this place is about light and love and peace. I'm so grateful I got to visit it and the remarkable man who created it all. 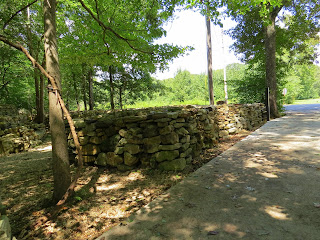 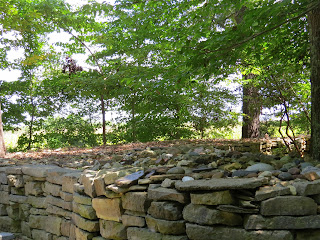 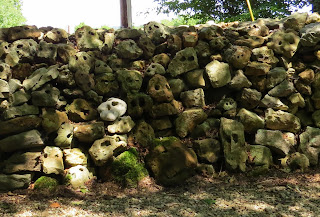 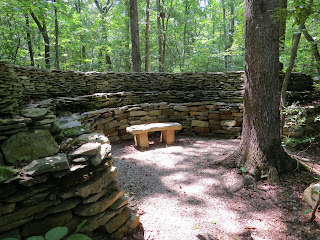 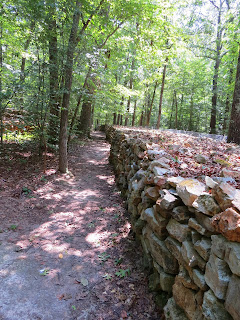 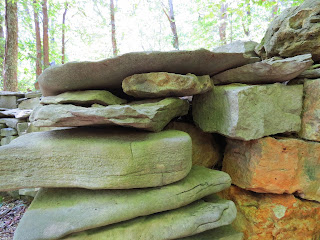 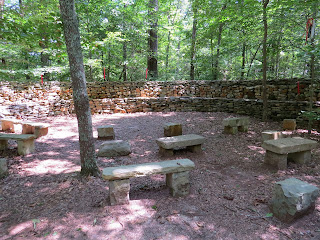 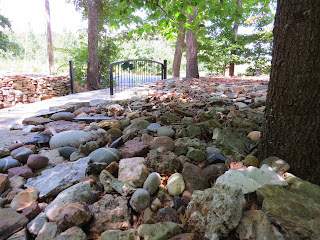 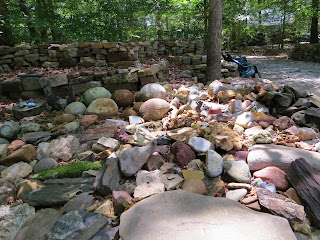 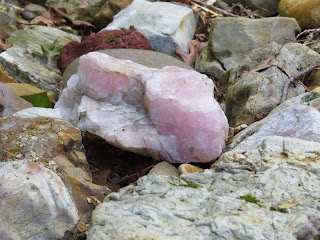 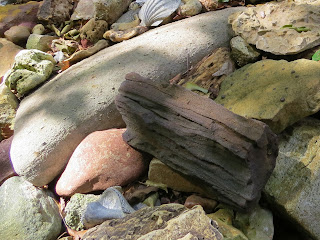 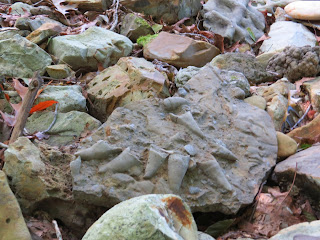 Love from Delta.
Posted by Beth Duke, Author of Delaney's People, Don't Shoot Your Mule, It All Comes Back to You, and Tapestry at Friday, August 26, 2016 4 comments: