He was nicknamed Geronimo but his Apache name was Goyaałé, "one who yawns". I became interested in his story after meeting a lovely singer/songwriter, Kathryn Scheldt. She and noted author Frye Gaillard co-wrote a song about Geronimo's imprisonment in Alabama called Geronimo's Cage. 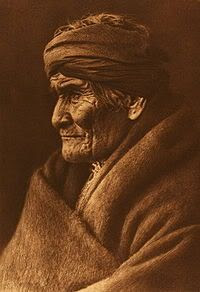 The song reveals history from the perspective of Frye's grandfather, who witnessed it firsthand. If you're like me, you had no idea the famed warrior was held in Alabama in the winter of his years . . . but he was. Mt. Vernon Barracks near Mobile housed a small community of Native Americans. Their chief was promised a short jail term and a return to Arizona.
It was a Broken White Man Promise. Geronimo had a lot to be angry about well before that, though.
In 1858 his mother, wife, and three children were killed by Mexican bounty hunters seeking scalps. "I could not call back my loved ones, I could not bring back the dead Apaches, but I could rejoice in . . . revenge," he later declared. During the next 15 years he rose steadily as a war leader among the Apaches. Apache agent John Clum, who arrested Geronimo in 1877, described him as "erect as a mountain pine, while every outline of his symmetrical form indicated strength and endurance. His abundant ebony locks draped his ample shoulders, his stern features, his keen piercing eye, and his proud and graceful posture combined to create in him the model of an Apache war-chief." 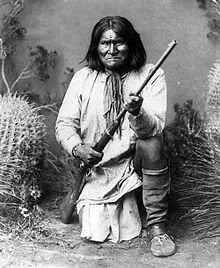 He fought valiantly against both Mexican and U. S. troops though he was heavily outnumbered. Known for his daring exploits and escapes, he was once tracked to a cave in New Mexico. U. S. soldiers waited patiently but he never emerged into their sight. He was spotted in the area soon after. The second cave entrance/exit has never been found.
White settlers called him "The Worst Indian Who Ever Lived".
Geronimo surrendered to Lt. Charles B. Gatewood in 1886. The Apache called him "Bay-chen-daysen". That translates as "Long Nose".

Well, they probably disliked more than his schnozz. 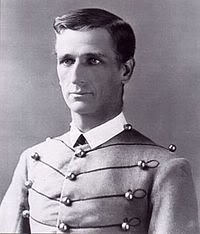 That's the lieutenant at right. His charge was to pursue the chief in Mexico and subdue and return him to the United States dead or alive. Geronimo gave him credit for his surrender though he claimed later that he was completely misled in the terms. I'd say that's the truth.


His incarceration began in San Antonio, but Geronimo was soon relocated to Pensacola. In 1887 he was reunited with his family and taken to Alabama. Frye's grandfather recalled the train rolling into the station with clarity. It's sad to imagine him clutching the bars of a rail car.
After seven years they were taken to Fort Sill, Oklahoma. The chief lived out his life there and became a well-known celebrity. He appeared at numerous fairs, including the 1904 World's Fair in St. Louis. He rode a Ferris wheel, sold souvenirs and put on a roping exhibition. He was seventy-five years old at the time. The following year he rode in President Theodore Roosevelt's inaugural parade, still proud. 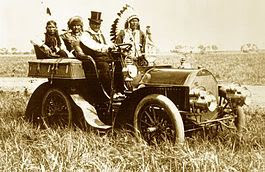 That's him in the headdress  in a 1905 Locomobile Model C in Oklahoma.

He fell from a horse while riding home one night in 1909. He lay there in the cold for hours before they found him, and pneumonia set in. He told his nephew on his deathbed that he regretted his decision to surrender. Geronimo is buried in the Apache Indian Prisoner of War Cemetery in Fort Sill. 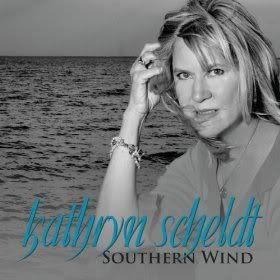 
Love from Delta.
Posted by Beth Duke, Author of Delaney's People, Don't Shoot Your Mule, It All Comes Back to You, and Tapestry at Wednesday, July 20, 2011