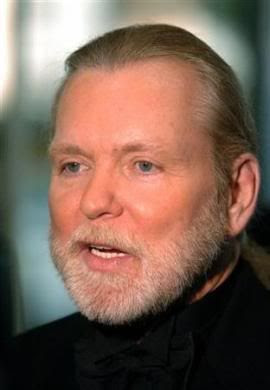 I admit it: my knowledge of Gregg Allman has been limited to a deep appreciation for I'm No Angel and an esoteric fact or two. I know about Cher and Elijah Blue. He lived in Sarasota, and he once came into a place where I worked. He seemed nice.

The Allman Brothers Band has its legions of fans, but I was not really among them. Jessica always makes me smile, though, and Midnight Rider is a good tune. Dickie Betts used to shop in my husband's store and was kind enough to fix my son's bicycle. I remember discovering he was as famous for his bow-hunting skills as his musicianship.

I was living in deep Allman Brothers Territory but not really aware of it. One of our friends in Bradenton was a former roadie for the band. He didn't share too many tales.

Now I know someone who does, and suddenly Gregg Allman is very interesting. At the behest of his former travel assistant and personal friend, David Boyd, I listened to Ocean Awash the Gunwale. It's a good song, and these lyrics stand out:

Perhaps this story sums him up better than any. David says, "One occasion that was typical of him, but unknown to many, happened the day following a show in Charlotte, North Carolina. One of his fans was a professor at the school. Over drinks in the hotel room, this professor asked Gregg to talk to his students the next day, on the topic of poetry and writing. Always trying to please, he readily agreed. The next morning, Gregg approached me, saying he thought he had made a mistake: promising something he didn't feel qualified to do. I told him that I didn't know anyone MORE qualified. When we got to the school, he asked for a tape deck to play some music. Now, consider the fact that this was a class full of young students. I honestly don't know if anyone in the class even knew who was standing in front of them. While a song from the new album was playing, Gregory turned to the blackboard and began writing. In the course of the 3 minutes or so that it took the song to play, he had written perhaps 20 lines on the board. The verses were not familiar to me. (When I asked him about them later, he told me he had composed them on the spot, in front of the class!) He then told the kids that writing poetry was not about rhyming words, but about connecting with emotions. I was very proud of him that morning. It would be interesting to know whether any of those kids even remember this talk, but I sure do. My only regret is not having saved the words he wrote on the board that day. But he told me once that once a song has come to him, it is always there."

Gregg is back on tour and in the news after a successful liver transplant. His new album is called Low Country Blues and was produced by the legendary T-Bone Burnett. After its debut at seventh place on the Billboard charts, I suspect Mr. Allman is in for quite a comeback.

The Allman Brothers Band started all of this in 1969. Gregg says music was a consolation during his traumatic health problems before and since his transplant surgery.

"It was a great feeling to have a real good record in the can," he told Reuters.

He said the operation was "the most horrendous pain I have ever been through" and it had taken him a year to recover enough to be able to tour again, although he is still in pain and will need further treatment later in the year. "I feel like someone hit me with a sledgehammer. But I'm alive."

He even went on a brief tour with Elton John and Leon Russell four months after the operation."It was good and it got me out of the house."

I hope Gregg Allman stays out of his house a lot, and sells out a whole lot of houses. Here are some songs you should check out, with thanks to David for his valuable good music alerts and reminders.

Love from Delta.
Posted by Beth Duke, Author of Delaney's People, Don't Shoot Your Mule, It All Comes Back to You, and Tapestry at Sunday, July 10, 2011