Yesterday, an accomplished author with Alabama roots attempted to convince me that all monuments, all statues, all memorials to the Confederacy should be removed from public view. When I vehemently disagreed, he (rhetorically) took his ball and went home by unfriending me on Facebook.

That's too bad, because I'd like him to see the history lesson I'm offering in return for his. It's one he didn't see in textbooks, nor did any of us.

Most are familiar with Union General William Tecumseh Sherman and his infamous march through Georgia. Less known is the fact that Sherman saved his most savage assault for South Carolina, the first to secede and his ultimate target. His aide-de-camp, Major George Nichols, published a book about this campaign and Sherman's contempt for the people of South Carolina. He referred to them as "the scum, the lower dregs of civilization. They are not Americans; they are merely South Carolinians."

Nichols said, "Searches for hidden valuables by Union soldiers were 'one of the pleasant excitements of our march.'"

Federal officer James Connolly wrote to his wife that halfway through the march he was "perfectly sickened by the frightful devastation our army was spreading on every hand." He reported how most houses (private residences) were first plundered and then burned, and women, children and old men were turned out into the mud and rain.

Arson and plundering were far from the only outrages committed against the civilian population. Historian Jacqueline Campbell wrote that African-Americans, especially female ones, were often the victims of mistreatment by Union soldiers, and their officers were aware of these offenses. Black women, Campbell noted, were viewed by white soldiers as "the legitimate prey of lust."

Author William Simms described the rape of black women by the soldiers, then their mistreatment of white women and even the dead:
"The poor Negroes were terribly victimized by their assailants, many of them...being left in a condition little short of death. Regiments, in successive relays, subjected scores of these poor women to the torture of their embraces. In several cases, newly made graves were opened, the coffins taken out, broken open in search of buried treasure, and the corpses left exposed."

A Mr. McCarter of Columbia recorded similar atrocities, how "frightened Negro women sought protection and places of refuge against the lustful soldiery." He added "the bodies of several females were found stripped naked with only such marks of violence upon them as would indicate the most detestable of crimes."

A Columbia physician, Daniel Trezevant, recorded several horrible instances of rape, one at a house where Federal soldiers seized Mrs. Thomas B. Clarkson and "forced her to the floor for the purpose of sensual enjoyment. She resisted and held up her infant as a plea for their sparing her. The soldiers relented, but took her maid instead and in Mrs. Clarkson's presence raped her."

There were countless instances of pillaging, burning and rape in Sherman's wake. Reverend William Lord was the rector of the Episcopal church in Winnsboro, S. C., and the townspeople sent him as an emissary to General Sherman. He met with some of his officers, who conveyed his plea for mercy: Winnsboro contained no cotton held in storage and sheltered only helpless women and children. He asked that the army on its march not be permitted to burn and pillage it.

Sherman's reply was, "Burn and pillage be damned! My soldiers may do as they please!"

In response to the idea that Confederate statues be removed lest they offend the eye, I submit that we obliterate any shrine to Sherman, starting with this one in New York. It certainly offends me. 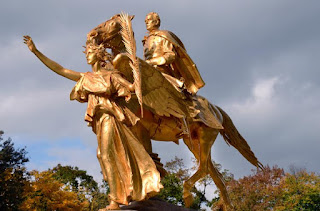 "If the party could thrust its hand into the past and say of this or that event, it never happened—that, surely, was more terrifying than mere torture or death. ... And if all others accepted the lie which the Party imposed—if all records told the same tale—then the lie passed into history and became truth."

Love from Delta.
Posted by Beth Duke, Author of Delaney's People, Don't Shoot Your Mule, It All Comes Back to You, and Tapestry at Wednesday, July 01, 2015