A Tree Grows in Alabama 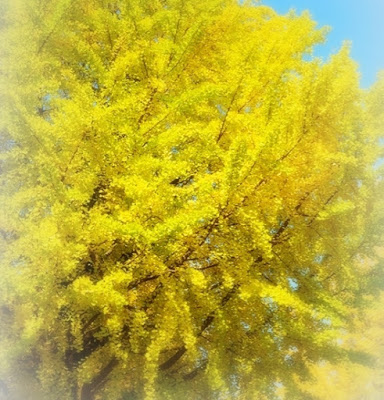 My grandmother sat perched on the edge of her bed, smoothing her ivory chiffon skirt nervously. She looked like a porcelain doll, even at ninety-two. Lucile was the kind of woman who could wear head-to-toe lace-trimmed ivory anywhere but a funeral and look perfectly appropriate.

Her childhood was one of utter poverty. Her mother was widowed at a very young age and left with eight children to feed. My grandmother married at fifteen and bore her first child at sixteen. She read voraciously and was one of the best-educated people I knew, despite leaving school after eighth grade.

She was warm, loving and beautiful. Lucile was adored by us all, the heart of our family. As a toddler my mother would ask if I wanted to go to "Mama's." I didn't know about the apostrophe, so I called her Mamas all my life.

Mamas and Granddaddy were the center of the universe to their small grandchildren. We grew up pampered, encouraged, and assured of unconditional love. Granddaddy commissioned one of the first private in-ground swimming pools in the county for us to play in. He'd toss quarters into the deep end for us to dive and retrieve, a small fortune to us at the time. He would take me aside with a smile and hug me, whispering, "You're the best one I've got." I discovered later he did that with each grandchild, and loved him even more for it.

They left Alabama upon retirement for a small Florida town. Granddaddy was a borderline diabetic, but he chose to ignore the diabetic part and cling to the borderline.

We'd lost him to a heart attack many years before. It was my introduction to shattering loss, a time in my young life of utter confusion and despair. I stood outside and sobbed for an hour the night he died, asking God why he'd taken someone I loved so dearly.

He was buried in Arcadia, Florida, and now his family was scattered across several other states. Mamas had made the painful decision to have his remains exhumed and returned to his Alabama hometown. She was planning a service to honor him all over again in a few weeks. As a result we were all thinking about the part he'd played in our lives more than usual.

Today's mission—the one I couldn't bear to help with—was to locate a plot in the cemetery for Granddaddy with an adjacent one for Mamas. My grandmother planned a service for his reburial, and I was praying for the strength to help her through it in a few weeks.

She was still in fairly good health, but her trips to the hospital were becoming more frequent. None of us could bear the thought of losing her. We lived in fear of pneumonia and broken hips.

My mother poked her head into the room. "Are you ready, Mama?"

Mamas nodded and I helped her to her feet, trying to contain my tears and act cheerful. She wasn't fooled. "It'll be hard, honey, but I'll be fine." She kissed my cheek and squeezed my hand before taking Mother's arm and heading for the door.

I decided to clean house, my least favorite activity, to distract myself for the next few hours. I thought about the cemetery, wondering if they'd be able to find an acceptable space. I hoped my grandmother was feeling strong and faithful in her decision to bring Granddaddy home after almost thirty years. It was a very expensive and complicated process. Some people had openly questioned the idea, and she'd cried and prayed over it for months. Mamas had discussed her feelings with me several times. I'd encouraged her to follow her heart no matter what anyone said. It was to fall to me, the only grandchild able to attend, to represent all of my cousins that day. She wanted me to place a rose on his new grave as part of the ceremony. Burying Granddaddy again would be one of the saddest things I'd ever experience, but it was right to have him next to her for eternity.

When the phone rang, my mother’s excitement made me throw the dust rag down and collapse into a chair to listen.

“You would not believe what I’m looking at,” she said. “We stopped by the old house and the ginkgo biloba tree is huge and brilliant golden yellow. You can see it from a mile away.”

I pictured the three-foot-tall twig I’d known as a small child, carefully surrounded by sturdy wire fencing and forbidden to grandchildren. Granddaddy had fussed over it constantly but we never saw a single ginkgo leaf I could recall. The tree was a running joke; something to kid him about. He never gave up trying to make it grow, and it never obliged.

On a whim, Mother and Mamas had driven out of their way to visit the house my grandparents lived in during my childhood. The neighborhood we remembered was gone. Dilapidated houses remained with yards gone to seed. No children ran and played here; no one remained from the time we'd known and loved this as the warm, happy place we cherished in memory.

"It's the one beautiful thing here, Beth. It's at least thirty feet tall, and so very pretty. Your granddad would be so thrilled. Think how he fussed over that silly twig every day." We laughed a little, remembering the constant joking over his tree obsession.
We chatted for a minute about our memories of that place and how magical it was for all of us. Mom took a deep breath and said they needed to get to their appointment at the cemetery.

"I love you, Mother. Give my love to Mamas. I'm so glad about Granddaddy's ginkgo."
I closed my eyes and pictured all the cousins arrayed on the steps of that house, we girls in ruffled Easter dresses with legs akimbo and most unladylike. I remembered the rare winter when the pool froze over and we "skated" across it in socks. The hours and hours we'd spent playing at my grandfather's desk, pretending we were businesspeople. The joy of gathering at the table to play hours of Rook, munching on popcorn Granddaddy popped atop the stove. Gathering pecans in the side yard, helping my grandmother water her beloved flowers. Every bit was as vivid as yesterday.

Still, I was trying to catch the wisp of something long forgotten. The tree. Something about the tree. It had to have had some special significance, the way Granddaddy fussed over and protected it. It was a story I'd been told as a young girl, not fully understood or appreciated.

Tears rolled down my face before I even realized I'd remembered.

Before I was born, my grandmother had thyroid cancer. Her future was uncertain at best and the family was terrified of losing her. Autumn was bleak. Mamas grew depressed and defeated, too weak to do anything but lie on the couch. My mother spent endless days caring for her, praying for a miracle and trying to make her smile.

Mother still hates autumn to this day. She experiences it as a time when the world is dying, turning to dull brown and losing its summer joy. I have no doubt her feeling is rooted in that dark season so long ago.

Emory University Hospital in Atlanta was my grandmother's best option for treatment. It lay two hours away, but Grandaddy took her back and forth several times a month. It was a grueling time for her; my mother told me Mamas had been offered little hope for a cure.

In mid-November she saw the magnificent ginkgo biloba trees on the Emory campus burst into color. She was fascinated by the delicate fan-shaped leaves and their brilliant golden canopy. They transformed the plain landscape; they welcomed her each time to the doctors and nurses who worked so hard to heal her.
Grandaddy noticed the light in her eyes when she looked at them. He did what any man in love with his wife would do, though it took him on a lengthy and difficult search in 1950's Alabama.

Somehow he located a rare ginkgo and planted a tiny sapling for her, a symbol of his love for Lucile and his hope for their future together, right in that modest Alabama front yard. His proudest legacy—children, grandchildren and great-grandchildren—had scattered like fall leaves across the south and never beheld what became of his precious little fenced-in plant. We'd forgotten it, lost among the memories of family laughter and love.

Granddaddy had lived in Florida for many years before he went home to God. He never saw the ginkgo biloba soar to its towering glory for the world to behold, but my grandmother did . . . at the perfect, breathtaking moment. And she knew without question she'd made the right choice to bring him home, to the place and the woman he'd always love.

Posted by Beth Duke, Author of Delaney's People, Don't Shoot Your Mule, It All Comes Back to You, and Tapestry at Tuesday, November 06, 2018