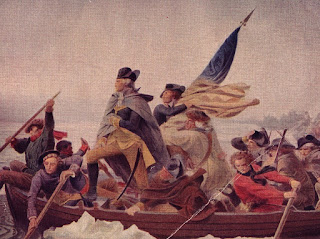 
It's being spray-painted across a lot of statues these days, including but not limited to George Washington's.

George was, of course, the most anti-colonial of colonials. The men who fought to liberate the colonies from British rule risked absolutely everything to do so.

I have ancestors who were among those men. On one branch of the family, brothers took different sides and the elder, a redcoat colonel, ended up preventing the execution of his captured rebel sibling (my many-times-great-grandfather). I am here by his grace, in this country, in this place and time, you might say.

In another branch of the family, my ancestors were apparently true colonials, loyal enough to the crown to flee to Canada and wait things out, sipping their tea and glancing down to see when it might be a good time to circle back. (It's interesting to ponder what might have happened had we remained British colonies.)

"Colonial" conjures images of smug Brits being carried on the backs of native women. (This wasn't uncommon in the colonies of the Empire. It's ugly, but it's history.) We were British colonies, and we carried a lot on our backs, metaphorically, until we got tired of it in 1776 and decided we could determine our own, better way of life for all.

We hold these truths to be self-evident, that all men are created equal, that they are endowed by their Creator with certain unalienable Rights, that among these are Life, Liberty and the pursuit of Happiness.

Two hundred and forty-four years of the greatest experiment in human freedom is marked today. A country in which, for better or for worse, people of all colors and creeds and religions have come together to make their contributions to society. Make no mistake, they are some of the most glorious and diverse contributions in the history of the world.


A turbulent history gave birth to and developed The United States of America, and I still love her, warts and all. I love my friends and fellow Americans of all colors, and celebrate them.

We are together on this journey, and we have come so very far. Many, many persons of color are among the most accomplished and successful of our country in 2020. We are truly grateful for that.

And, because the vast majority of Americans are goodhearted people, we want even better for every single one of us. We are an exceptional country.

Excellence is the gradual result of always striving to do better, and we will do better. Two hundred and forty four years have taught us the lessons we need to know and remember.

The hopes and dreams our ancestors held for us are woven into those lessons. Including my distant grandfather's, and I thank him for freedom and the opportunity to succeed in these beautiful United States of America.


Posted by Beth Duke, Author of Delaney's People, Don't Shoot Your Mule, It All Comes Back to You, and Tapestry at Saturday, July 04, 2020