The King of Cool 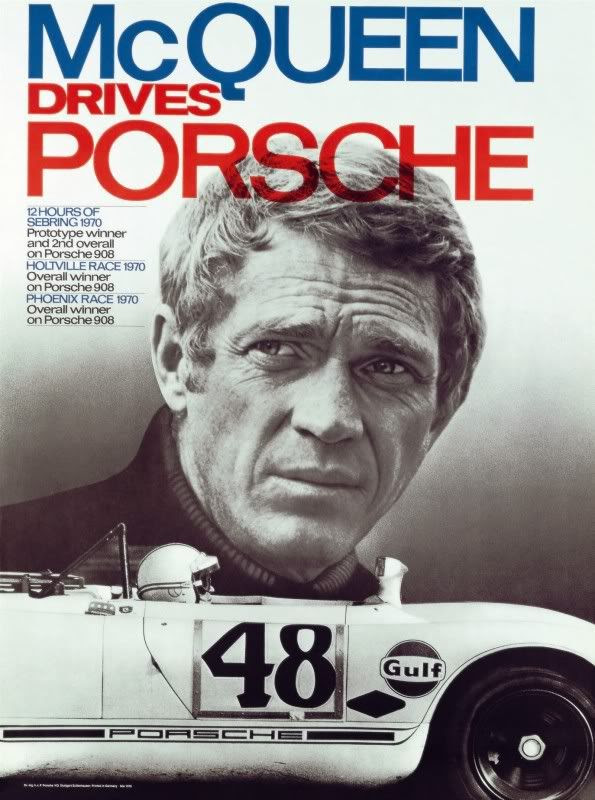 I don't really remember much about Steve McQueen, but when I saw this poster—one of many Porsche recently released into the public domain—I sure did sit up and take notice. The man is a legend.

Take a look at Steve's old ranch and vineyard. It's for sale. There's a pretty nifty Stearman biplane included.

Now check out a Field of Dreams Mustang commercial. Gotta love it.

Car chase buffs adore this one: Bullitt. I never saw the movie, but Steve sure could make a fast car look good.
"When some rare Chicago blood starts spilling in San Francisco, they hand Bullitt the mop." Sheesh.

I remember seeing a video clip of him doing a Firebird commercial once at a Pontiac meeting. I searched for it to no avail, but did find some pretty neat vintage ads:
"Wide Tracking"
1968 GTO

As the world approaches the thirtieth anniversary of his death, two new biographies are being introduced. One is Steve McQueen: The Life and Legend of a Hollywood Icon; the other, Steve McQueen: A Tribute to the King of Cool. In the second are hundreds of photos taken of McQueen throughout his life and movie career. Some are being published for the first time. There are personal items, documents and movie memorabilia as well.

It includes a foreword by Barbara McQueen (left), a Steve McQueen family tree, and quotes by several Hollywood luminaries.

He had a childhood filled with obstacles and once said, “My life was screwed up before I was born.”

McQueen was raised by his grandparents, Victor and Lillian Crawford. They lived in a 10-foot by 20-foot shack. Later, he was taken in by his great uncle and worked as a farmhand.

“On the streets is where you perfected your con . . . you learned how to adapt and play different roles.”

The man had street cred.
He sold encyclopedias door-to-door and worked as a towel boy for a brothel. Eventually, Steve gained notoriety as a TV actor and later successfully transitioned to films, becoming one of the most popular actors in the world.

Posted by Beth Duke, Author of Delaney's People, Don't Shoot Your Mule, It All Comes Back to You, and Tapestry at Friday, April 08, 2011

Email ThisBlogThis!Share to TwitterShare to FacebookShare to Pinterest
Labels: Barbara McQueen, Steve McQueen, The King of Cool, The Life and Legend of a Hollywood Icon