The Not-So-Friendly Skies of Comtel 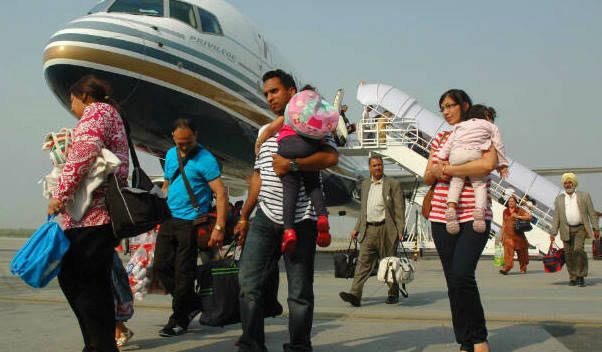 Air travel has changed a lot over the years. Gone are the days when you donned your Sunday best and sipped cocktails delivered by svelte seductresses. Flights are . . . well, different . . .  these days.
On Tuesday, passengers aboard charter company Comtel's jetliner traveling from India to Britain were held up for the equivalent of about two hundred bucks each in U.S. funds. During a layover in Vienna, they were commanded to fork over the cash if they wanted to reach Birmingham. This was thoughtful: they were allowed to leave the plane to access ATM's to fetch the money.
Folks were told the payment was for either fuel or . . . suspiciously . . . "fees." Even though they'd presumably purchased tickets from Comtel, a bit more was necessary to get them to where they were going.
"I could not believe what I was witnessing," Lal Dadrah told British network ITN. "It was as if we'd been held hostage against our wills, with the 24,000 pounds we all eventually had to pay being the ransom."
Today, passengers aboard a Comtel flight were asked for money before takeoff from Amritsar, according to Madrid-based Mint Aviation. They own the aircraft and provide the crew.

Richard Fluck, Comtel's CEO, told CNN that the dispute involves Comtel, Mint and a third firm, Astonbury Ltd., which sold the tickets under the name Skyjet. Skyjet suddenly suffered corporate failure this week, with the British government urging about 200 passengers who booked flights with them to make new arrangements.


Officials at Birmingham Airport said all Comtel flights to and from Amritsar have been canceled for the coming weekend, and the Civil Aviation Authority said it would help get stranded fliers back home.


Here's the kicker: Astonbury had not paid either of the other two firms for their last two flights, so Mint told its crew to collect the money it was owed from passengers or refuse to continue.

According to a defensive Mint CEO—Alfonso Martinez—it was Comtel that refused to pay and owed money to Amritsar's airport authority as well. Martinez said Comtel ordered the flight crew to take up a collection in Vienna.
Next time you're annoyed at having to remove your shoes in security or choking down what passes for an in-flight snack in the USA, remember it could be worse. Maybe the TSA's scanners can see more than modesty allows, but you can be fairly sure you won't be shaken down in Atlanta on your way to JFK.
Love from Delta.
Posted by Beth Duke, Author of Delaney's People, Don't Shoot Your Mule, It All Comes Back to You, and Tapestry at Thursday, November 17, 2011