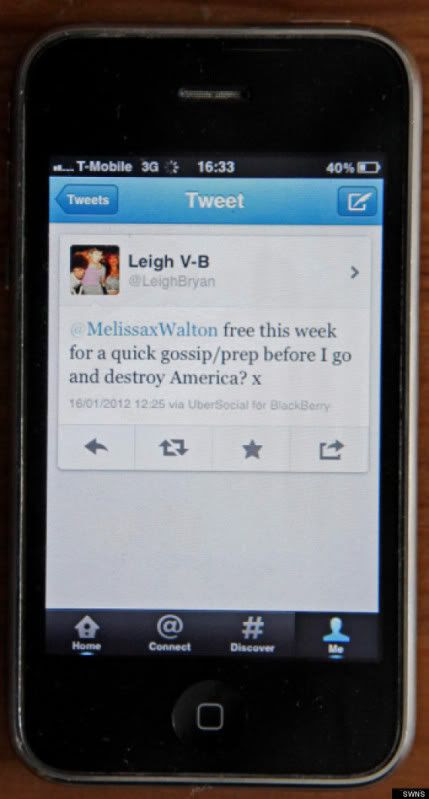 British tourists Leigh Van Bryan, 26, and Emily Bunting, 24, were detained by the United States Customs Service, placed in a cell and grilled for twelve hours upon arrival in America on January 23rd. Homeland Security officials placed Bryan's name on a "One Day Lookout" because he Tweeted he was "coming to the United States to dig up the grave of Marilyn Monroe" and "destroy America."

His traveling partner Emily said, "I almost burst out laughing when they asked me if I was going to be Leigh's lookout while he dug up Marilyn Monroe. It got even more ridiculous because the officials searched our suitcases and said they were looking for spades and shovels."

Bryan said officials told him, "You really f***** up with that tweet, boy," before handcuffing and putting him in what he described as a "cage" inside of a van. He said he was then transported to a prison with other suspected border offenders.

He continued, "It's just so ridiculous it's almost funny but at the time it was really scary. The Homeland Security agents were treating me like some kind of terrorist."

Well, that is somewhat understandable. His words could be construed as a threat.

The tweets were sent a week before their trip, indicating the U.S. government had flagged the pair well in advance—raising all sorts of thorny social media issues. Bunting claims "destroy America" meant they planned to "get trashed and party." Poor choice of words, Emily.

I don't believe these two intended to dig Marilyn up, and they don't look capable of destroying America as a team. Perhaps they can serve as a cautionary tale for those who throw words around cyberspace a bit recklessly.
Dry humor sometimes gets lost in translation.
Love from Delta.
Posted by Beth Duke, Author of Delaney's People, Don't Shoot Your Mule, It All Comes Back to You, and Tapestry at Tuesday, January 31, 2012