And They Lived Happily Ever After For Two Weeks

"A wedding is a funeral where you smell your own flowers."
Eddie Cantor

"All marriages are happy. It's the living together afterward that causes all the trouble."
Raymond Hull


"All men make mistakes, but married men find out about them sooner."
Red Skelton


"I enjoyed every minute of my tiny little bite-sized marriage. I dedicated myself fully in the earnest struggle to make things work, but after two long weeks of matrimony . . ."
Sinead O'Connor


Okay, I made that last one up. One imagines Sinead or Kim Kardashian saying it, along with the ever-growing number of celebrities determined to make a mockery of "Till death do us part." It is more like "till I get bored" or "till I find out about the pre-nup" or "till you clip your toenails in bed on top of my teacup poodle."
Barry Herridge, the guy who most recently wed Miss O'Connor, was apparently unaware that his shaved-head-combat-boot-wearing fiancee who famously destroyed a photo of the Pope on camera was . . . a bit wild. Seems that as soon as wifey took off on her wedding night to find a little weed to smoke, Barry was so shocked he had to reconsider his choice. Who would have imagined that Sinead O'Connor would smoke weed? Or that Amy Winehouse used to get tipsy occasionally?


The woman most famous for her rendition of Nothing Compares 2 U has four children from her previous relationships. She wed music producer John Reynolds in 1989 and journalist Nicholas Sommerlad in 2001. This past April, she split from longtime friend and collaborator Steve Cooney.
Maybe for her, nothing compares 2 Sinead with a joint or nice bowl.
Sorry it didn't end blissfully, Sinead. When you are well-known, it is difficult to commit to another human being for more than a New York minute. We understand. 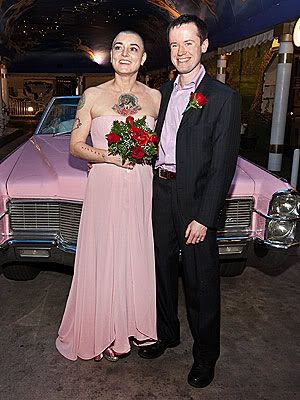 Love from Delta.
Posted by Beth Duke, Author of Delaney's People, Don't Shoot Your Mule, It All Comes Back to You, and Tapestry at Tuesday, December 27, 2011