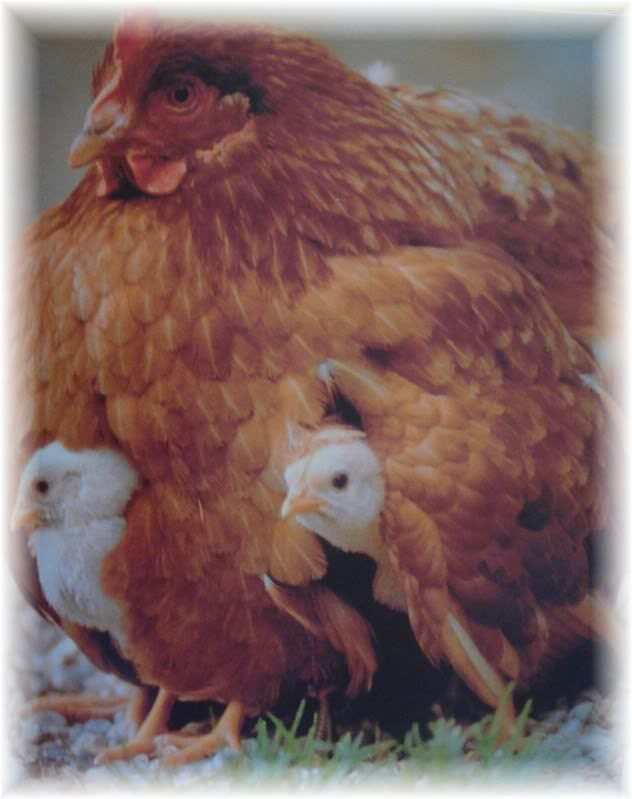 If you read this blog, if you are my Facebook friend, if you have ever been to (or driven by) my house . . . you are aware that I am somewhat obsessed with chickens. I was never a bird person, particularly not the kind to possess creatures that fly through the house and poop freely and are capable of crushing a knuckle with one tweak of the beak.
A few Alabama summers ago, my daughter wanted to get some pet chicks and raise them. We were vacationing here and living in Florida—we agreed to keep the little buggers for a couple of months and then relocate them to a nice home.
I did not count on their ridiculous level of cuteness. It was a sad day when we loaded the adolescent chickens up with a stranger, though her chicken-craziness was reassuring at the time. (I later discovered that some of our precious poultry was not well protected with her, but that's another story. We'll stick to light, feathery topics here.) 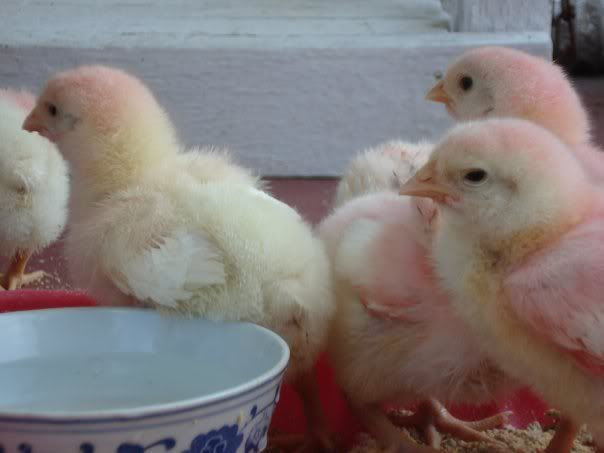 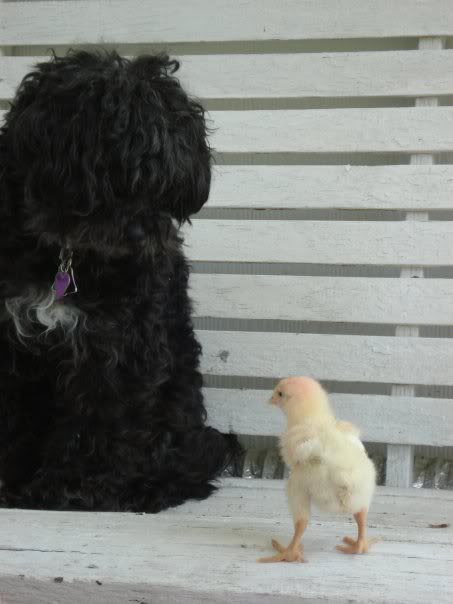 They looked like wee cotton candy fluffballs (the pink was some sort of topical antibacterial treatment, but it was pretty). That is Rodney staring down Beau. He was the bravest little chick in the world, and would run to Savannah when called.
Yup, we were chicken-whipped.
More babies followed, many of which grew into the hens you hear about from me these days. (The roosters—not so much. Roosters spend their days in mortal danger, protecting the flock.)
A moment please, for Pretty Rooster, Doodle, Mr. Fluffybutt and other brave males we lost in the line of duty. 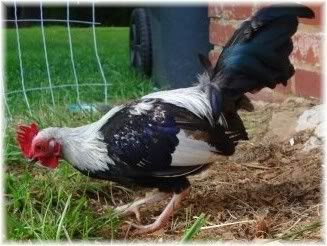 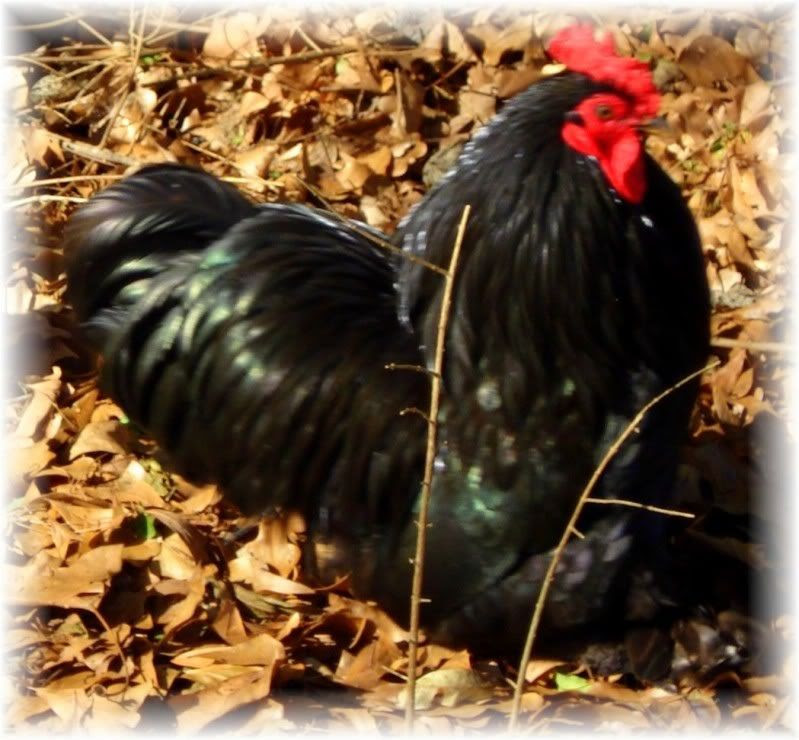 If forced to name a favorite, my personal chicken has to be Elizabeth. She is our most intrepid and intelligent hen and happens to be my namesake. I used to sit in the yard with this teeny chick climbing up my arms, over my legs and wherever else she ventured.
Elizabeth was this big: 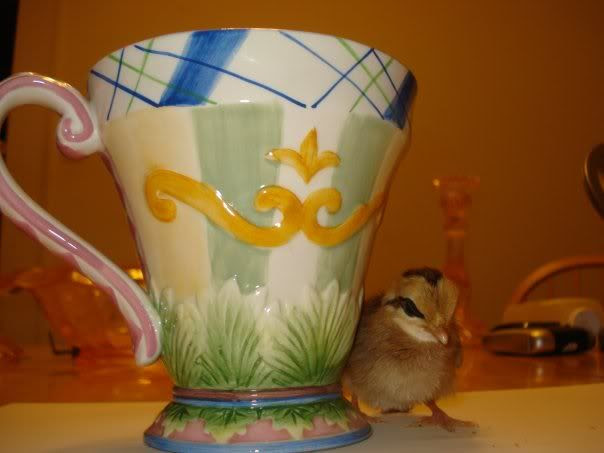 Here's Peep, our eldest and most maternal banty Araucana: 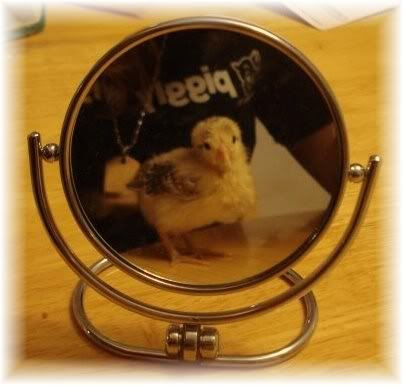 She is still adorable, even after raising several adopted eggs . . . er, chicks . . . over the years. Peep lays very small celadon green eggs, usually in the grass as she's running around the back yard. (I refer to these as drive-by eggings.) 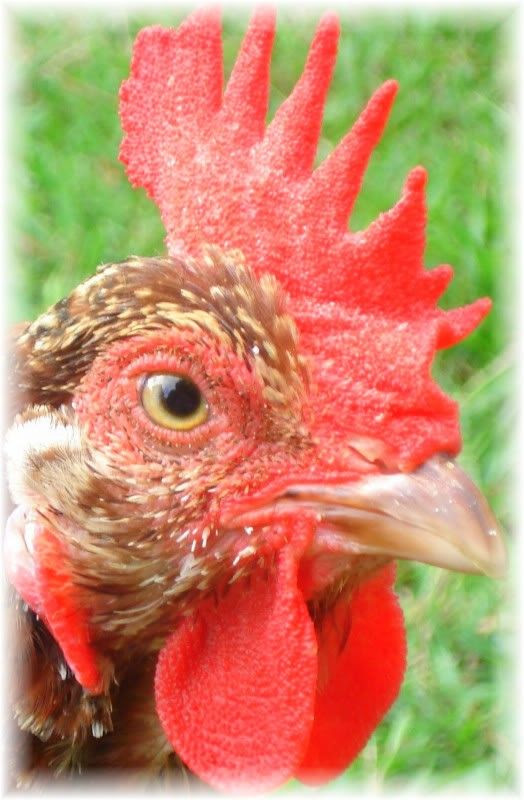 Elizabeth the Speckled Sussex, our matriarch/monarch, has aged well. Here's a bird's eye view of her—we will use it for an anatomy lesson.
That glorious red crown? It's her comb. That awful stuff hanging under her chin? That's her wattle.
As one unnamed family member recently discovered, do not try to tickle a rooster's wattle. I would not attempt it with a hen, either.
Her earlobe is visible beneath and to the left of her lovely golden eye.
Her eye, by the way, has excellent full-color vision. Her hearing is acute. She can sense a mozzarella cheese stick wrapper from a football field away.
Chickens are foragers and essentially omnivorous. Ours are so spoiled that they don't really have to forage much—they make a big show of scratching around the yard a lot, pretending that they have to look for food. I was recently told that their scratching discourages snakes. I sincerely hope that is true.
Interesting facts:
They spend their days roaming in search of tasty things. This includes trips to the porch door if I ignore them for sufficient periods. I am flirting with the idea of a chicken doorbell. My money says that Elizabeth would happily ring for cheese. 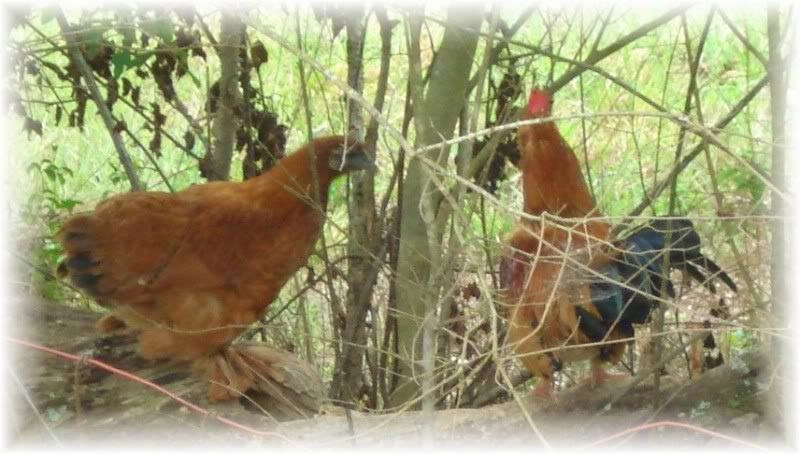 This is our comely teenage hen Peanut, daughter of the late Mr. Fluffybutt and Mrs. Fluffybutt, raised by the mannerly and ladylike Peep, being courted by a banty rooster who lives nearby. I'm hoping they'll get together and I'll have a new rooster-in-law.
Love from Delta.
Posted by Beth Duke, Author of Delaney's People, Don't Shoot Your Mule, It All Comes Back to You, and Tapestry at Wednesday, September 21, 2011