The Tower of Babel

From May 7 to May 28, 2011 this “Tower of Babel” in Buenos Aires was a place where the world's languages flowed together, allowing visitors from even the remotest locations on Earth to find a familiar book. 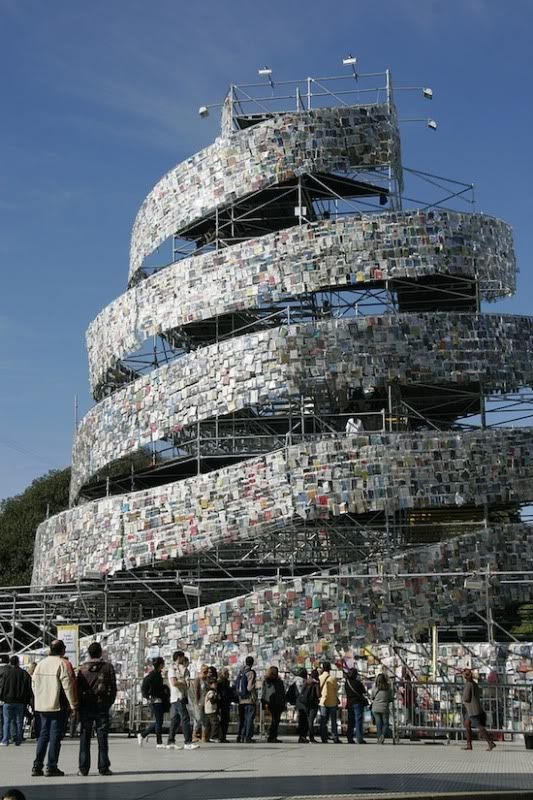 In biblical Babylon the residents talked with each other with complete ease since they were entirely united in their culture. Then they decided to make a soaring structure (referred to as the Tower of Babel) that would reach Heaven.

1 And the whole earth was of one language, and of one speech. 2 And it came to pass, as they journeyed from the east, that they found a plain in the land of Shinar; and they dwelt there. 3 And they said one to another, Go to, let us make brick, and burn them thoroughly. And they had brick for stone, and slime had they for mortar. 4 And they said, Go to, let us build us a city and a tower, whose top may reach unto heaven; and let us make us a name, lest we be scattered abroad upon the face of the whole earth. 5 And the Lord came down to see the city and the tower, which the children built. 6 And the Lord said, Behold, the people is one, and they have all one language; and this they begin to do; and now nothing will be restrained from them, which they have imagined to do. 7 Go to, let us go down, and there confound their language, that they may not understand one another's speech. 8 So the Lord scattered them abroad from thence upon the face of all the earth: and they left off to build the city. 9 Therefore is the name of it called Babel; because the Lord did there confound the language of all the earth: and from thence did the Lord scatter them abroad upon the face of all the earth.

When God got wind of what they were doing, their plan was struck down. Before the overachieving Babylonians with lofty aspirations knew what hit them, they were scattered around the globe and rendered incapable of communicating with each other using their once shared language.

The 2011 version of the tower united people through literature and featured audio of the artist,  Marta Minujín, speaking the word "book" in over a hundred distinct tongues. 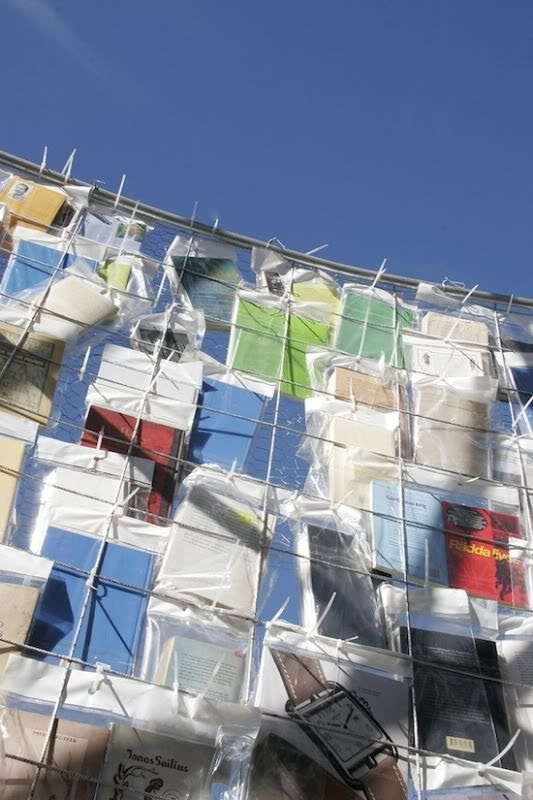 Minujín devised the tower in celebration of Buenos Aires being chosen as the United Nations Educational, Scientific and Cultural Organization’s (UNESCO) 2011 World Book Capital. The used raw materials were donated by libraries and readers eager to help, as well as more than 50 embassies. Each tome was protected by plastic.

At the end of the installation, some lucky visitors were allowed to take home a book each.The balance will be used to create a multilingual library.

It didn't even come close to reaching the heavens, but for bibliophiles it must have been something to behold.

Posted by Beth Duke, Author of Delaney's People, Don't Shoot Your Mule, It All Comes Back to You, and Tapestry at Sunday, September 18, 2011