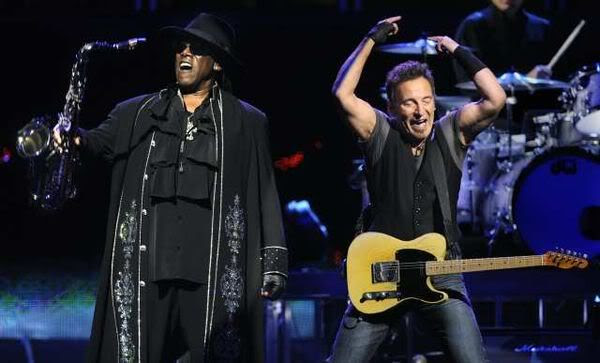 He was a giant of a tenor sax player. Clarence Clemons left this world Saturday, and The E Street Band will never be the same.

Born in Norfolk, Virginia in 1942, he sang in the church choir and with a family gospel group. "I grew up fast because I had to," Clemons remarked in Down Beat. "My father owned a fish market, and I helped him in the shop. We lived 15 miles from school, so I'd get up in the morning, go to school, and work at the market or deliver fish after school. It was late, and I was tired by the time I got home at night. This went on every day. I also had a lot of responsibilities for the family because my mother was going to school. She graduated from college at the same time I finished high school. I tell you, I didn't have much time for childhood innocence."

He attended Maryland State College on a music and football scholarship. His real ambition was to become a pro football player. During summer breaks he often signed on to play sax with combos or larger ensembles, working with such outfits as the Vibratones, the Newark Bears, and the Jersey Generals. He quit college just before graduating and moved north to Newark, New Jersey, where he became a counselor for emotionally disturbed children.

Clemons was working with a group called Joyful Noise when his path crossed Bruce Springsteen's.They were playing in Asbury Park, New Jersey, at bars about a block apart. One rainy night, Clemons strolled down to watch Springsteen's show. The Big Man reminisced: "I had my saxophone with me, and when I walked in this club—no lie—a gust of wind just blew the door down the street. Boof! I say, 'I want to play. Can I sit in?' Bruce says, 'Hey, you can do anything you want. Take a couple of background singers, anything.' I sat in with him that night. It was phenomenal. We'd never even laid eyes on each other, but after that first song, he looked at me, I looked at him, and we said, 'This is it.' After that I was stoked."

The world will remember his solos in countless Springsteen songs, but I've chosen something a little different for the blog video. I hope it wouldn't embarrass Clarence with its 80's cheesiness—I couldn't resist. Things didn't work out so well for Jackson Browne and Daryl Hannah, but they look pretty happy here . . . and The Big Man is all smiles, singing, and saxophone.

"I know that the tenor can affect people because it is an emotive instrument."
- Clarence Clemons, 1942 - 2011


Love from Delta.
Posted by Beth Duke, Author of Delaney's People, Don't Shoot Your Mule, It All Comes Back to You, and Tapestry at Monday, June 20, 2011