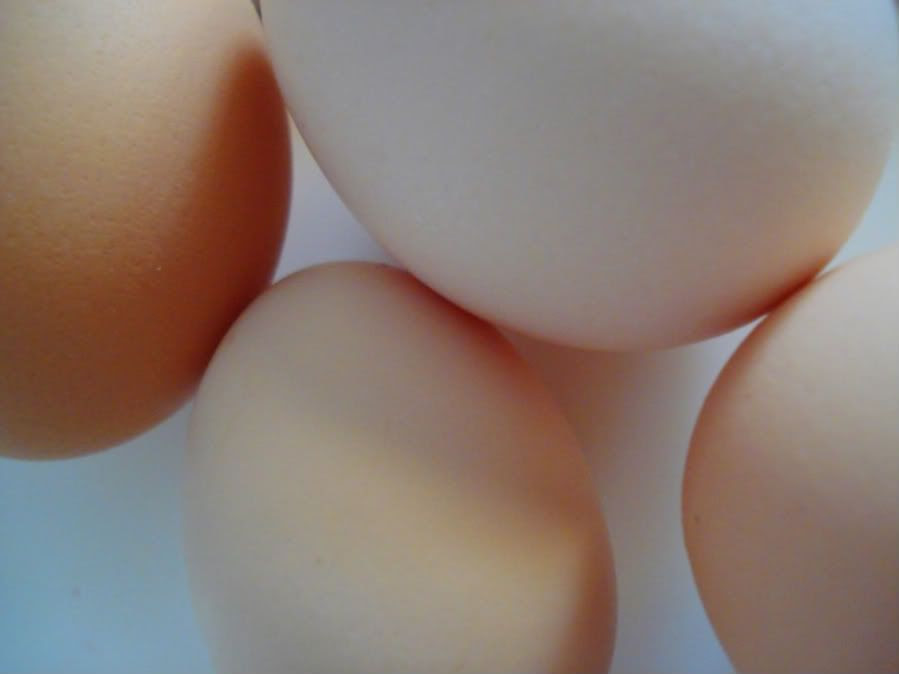 . . . Martha Stewart loves them, and forces her chickens to produce green, blue and purple ones.
. . . is often accused of raising people's cholesterol levels.
. . . can make or break any baked good.
- you can't make a decent soufflé without one.
. . . looks really pretty up close in a photograph.
. . . is an amazing food source.
. . . can be fun to play with (see below).

"Eggs were colored, blessed, exchanged and eaten as part of the rites of spring long before Christian times. Even the earliest civilizations held springtime festivals to welcome the sun’s rising from its long winter sleep. Ancient peoples thought of the sun’s return from darkness as an annual miracle and they regarded the egg as a natural wonder and a proof of the renewal of life. As Christianity spread, the egg was adopted as a symbol of Christ’s Resurrection from the tomb.
For centuries, eggs were among the foods forbidden by the church during Lent, so it was a special treat to have them again at Easter. In Slavic countries, baskets of food including eggs are traditionally taken to church to be blessed on Holy Saturday or before the Easter midnight Mass, then taken home for a part of Easter breakfast . . .
The Russians, during the reign of the tsars, celebrated Easter much more elaborately than Christmas, with Easter breads and other special foods and quantities of decorated eggs given as gifts. The Russian royal family carried the custom to great lengths, giving exquisitely detailed jeweled eggs* made by goldsmith Peter Carl Faberge from the 1880s until 1917."
Source: http://www.incredibleegg.org/egg-facts/eggcyclopedia/e/easter-eggs
The Incredible Edible Egg

"Up until modern times, children in English villages carried on an old sport called pace-egging. The name comes from Pasch, which means Easter in most European countries. This derives from Pesach, the Hebrew Passover which falls at the same time of the year. Similar to Halloween trick-or-treaters, pace-eggers went from house to house in costume or with paper streamers and bright ribbons attached to their clothes. Faces blackened or masked, they sang or performed skits and demanded pace-eggs, either colored hard-cooked eggs or substitutes such as candy and small coins."
Source: http://www.incredibleegg.org/egg-facts/eggcyclopedia/g/games
Eggcyclopedia (Yes, they have an eggcyclopedia. Is that cool or what? Eggsactly.)

Need I say more?
The photograph at top was taken on my kitchen counter. It is a close-up of the eggstravagant daily gifts we receive from Diablo, Zeus, Elizabeth and Dierks. They don't ask much in return other than the occasional bit of cheese, leftover berry, cracked corn or stroking of their feathers. Okay, the stroking of the feathers is usually my idea. 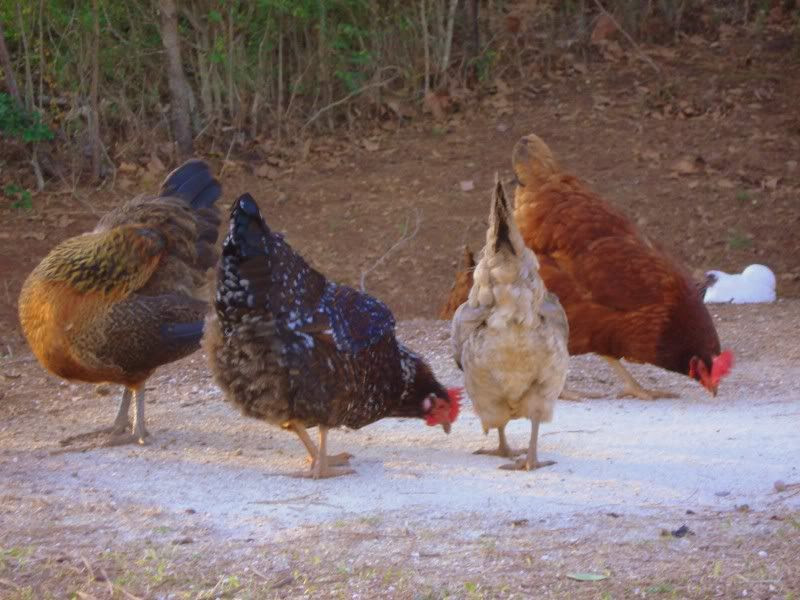 I could write about chickens and eggs all day long - especially when cooped up inside.
It's a beautiful day, though, and I'm going out to enjoy it. If I sit here too long, I'll start some serious punning, and you might never come back and read this blog again. I am not yolking. My brain is scrambling for an egg pun right now. Really - it's poultry in motion.
Don't get your feathers ruffled.
I'll stop hunting and pecking at this point.
To quote my witty daughter, "You crack me up like an egg on tile."
Love from Delta.
Posted by Beth Duke, Author of Delaney's People, Don't Shoot Your Mule, It All Comes Back to You, and Tapestry at Tuesday, March 01, 2011