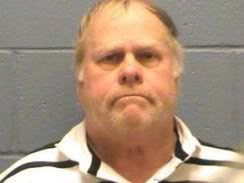 THIS MAN IS (POSSIBLY) A DENDRICIDAL MANIAC*.

*Accused, purported, innocent until proven guilty, might be pure as the driven snow.
Whatever the case, Harvey Updyke makes me ashamed to live in Alabama today. Said to be motivated by overwhelming Crimson Tide Fever, Harvey apparently decided the best way to support his football team was to poison rival Auburn's beautiful 130-year-old oak trees on historic Toomer's Corner.
Read more here

But Harvey, here. Harvey has offended every Alabamian I know, as well as some friends who bleed orange and blue.
I grew up seeing postcards of Bear Bryant walking on water in the local drugstore. Alabama football is a huge part of anyone's life in The Heart of Dixie, especially if you're among those God blessed with this birthplace. Tide fans and Tiger fans generally respect each other, even when things get heated near the end of the season.

National championships turn into an Alabama thing, not a school thing. And I am proud of the civility and manners at both universities. 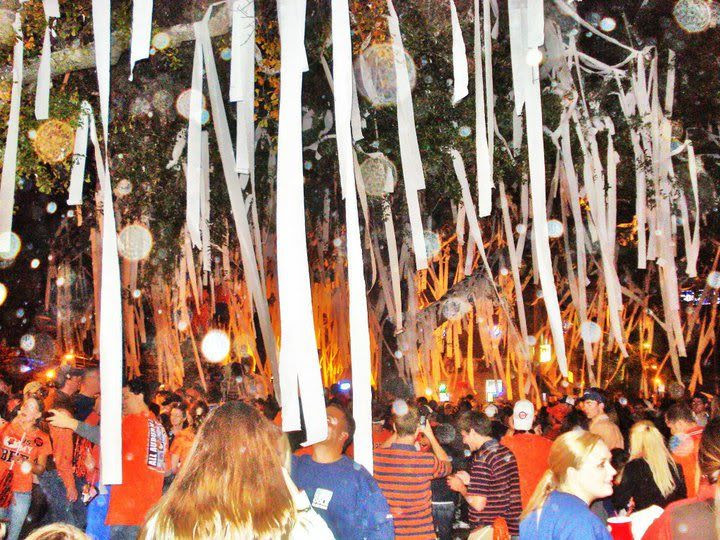 This photo, supplied by my daughter, shows what a victory celebration at Toomer's Corner looks like.

I had hoped to attend a traditional Toomer's Corner rolling-of-the-trees someday, or at least watch one from nearby. Now, the question of whether Auburn University can save their majestic Live Oaks will determine that.
I care. The students, faculty, administration, alumni and fans care. Harvey (or somebody like him) apparently doesn't.

If Mr. Harvey Updyke is indeed guilty of this malicious attack, shame on him. If it turns out it's someone else, my apologies to Mr. Updyke. On behalf of Alabamians everywhere: this is embarrassing, y'all.
Posted by Beth Duke, Author of Delaney's People, Don't Shoot Your Mule, It All Comes Back to You, and Tapestry at Thursday, February 17, 2011