A Wee Bit of Confederate History 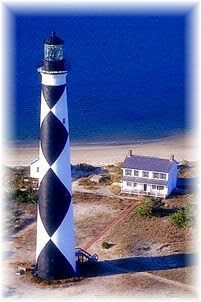 My mother (an accomplished watercolorist in her own right) told me this morning she'd painted a lighthouse in North Carolina in a class she's taking. She said it had a black and white harlequin pattern.
I figured it must be pretty iconic.
Naturally, I Googled it while we were on the phone. I know beautiful North Carolina pretty well, but have never spent time on the coast. I read a little bit, and my inner Confederate History Monitor was alerted.
"In 1861, the Confederate Lighthouse Bureau assumed all control of the lighthouse during the Civil War and ordered all lights to be disassembled so they could not be used by the Northern forces. Union soldiers quickly assumed control of the coast and took control of the lighthouse in 1862. In 1864, the original tower was blown up by Confederate soldiers and it also caused damage to the new lighthouse. A new lens was ordered after the lens was destroyed by the explosion. After that point, the lighthouse stayed permanently lit."
Source: NCBeaches.com
Cape Lookout Lighthouse
February 15, 2011
http://www.ncbeaches.com/Features/Attractions/Lighthouses/CapeLookoutLighthouse/
Cape Lookout Lighthouse
National Park Service - Cape Lookout Lighthouse
Confederate history is very important to me, and my husband as well. This weekend, we're attending the SCV's "Confederate Heritage Rally 2011" in Montgomery. Should be fun. We both have ancestors who fought in the war (I actually have my great-great grandfather's souvenir medal from a Confederate Veteran's reunion in Birmingham).
Confederate Heritage Rally
I hope my mother keeps that painting. (She is quite the perfectionist, and sometimes misjudges how beautiful her paintings really are.)
I want it. I even have a place in mind to hang it.
(My brother and I sometimes compete for her artwork, but she's painting a Rastafarian next week. He can have that one.)
Love from Delta.
Posted by Beth Duke, Author of Delaney's People, Don't Shoot Your Mule, It All Comes Back to You, and Tapestry at Tuesday, February 15, 2011