"When they first quit molting," she says, "they lay some weird eggs."
My ninety-five-year-old grandmother slowly rubs her thumb over the
smooth shell of an almond-shaped egg from our banty Cochin hen.
She is known by many names in our family; some of her grandchildren
call her "Mamas" (I started that when my mother would ask me as a toddler, "Would you like to
go to Mama's?" No one told me there was an apostrophe.) Others call her Grandmother, Grandmother
Lucile, Grandmother Luci, "Miss Luci" (this was particularly popular during the "Miss Ellie" years on Dallas),
Mother, Mom . . .
The one thing we all call her is wonderful.
I have been delivering fresh eggs on a weekly basis for awhile now, because she's allowed to eat them.
She's been through some pretty scary health problems in the past few months, and we were all very worried.

My Cousin Debi called in her prayer warriors. Mamas has rallied, however, and is making laps around her

She looks great, and is planning on getting her hair and nails done this week.

(She has perfect oval fingernails a twenty-year-old would envy.)
As I sit by her side, she's educating me today on poultry farming. She has a vast store of wisdom accumulated

over the years. It amazes me.

She grew up in Jacksonville, Alabama. This photo shows her at about eight years old, next to her brothers

Hoyt and Charlie. It was taken in the mill village*, in front of a quilt top she says her mother was making for

someone. For a dollar. 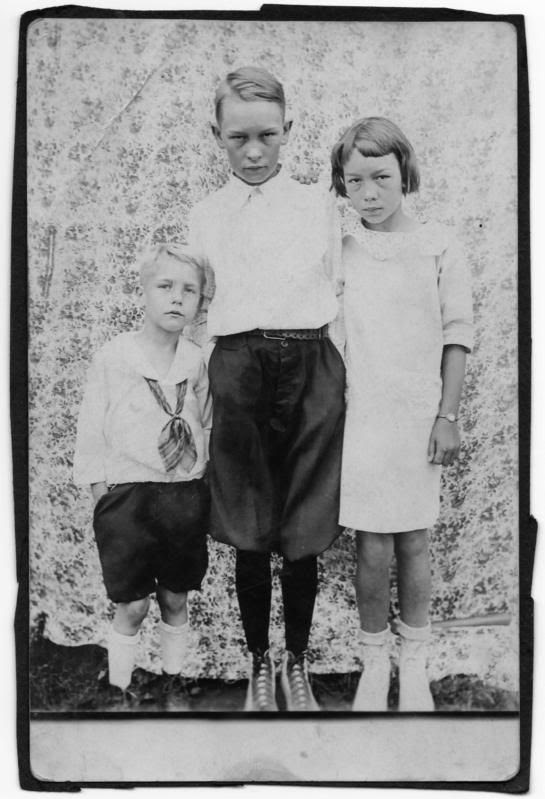 She has only recently told me much about the mill village. She remembers a house nearby with beautiful pink

roses growing along its fence. It was a little spot of beauty.
If you look closely, you'll see a dainty wristwatch on her arm. Though it was a time of poverty, she and her

cute as a button at seventy, sitting on the hood of her little convertible. She had clothes at that age that even

I envied.
She traveled the world with her second husband, a cardiologist. I remember trips to Germany and Hawaii and

many points all over the United States. She was the essence of glamor, running around in St. John knits, fur

and sunglasses. People mistook her often for actress Jane Wyman, and sometimes approached her for

autographs. She would smile politely and say, "Please. We're on vacation."

There is a character in Delaney's People named Margaret, and she is very much inspired by my

grandmother. In a chapter called "The Heart of the Family" Margaret has to stop eating eggs for cholesterol

reasons. That was written three years ago, so it kinda brings a smile to my face to be delivering fresh eggs to

Lucile these days. She is back out in the sunshine, and it wouldn't surprise me at all if she were to walk around

the nearby lake soon.

I don't have to tell you who the heart of the family is.


*This is the mill village made famous by Rick Bragg in The Prince of Frogtown. It's one of my favorite books,

and I've been known to make people read it.
The Prince of Frogtown

Love from Delta.
Posted by Beth Duke, Author of Delaney's People, Don't Shoot Your Mule, It All Comes Back to You, and Tapestry at Thursday, February 24, 2011