I Put My Innocent Gravy in the Freezer

I wasn't even going to write today. It's Saturday.
But last night, I cooked Jay a five-star feast of my homemade fried chicken tenders, dirty mashed potatoes, green beans and "thickenin' gravy"*. It was pretty fabulous. I even sent a plate to a friend who works nearby.
While I was cooking (Ladies, ever try to get all this stuff ready at the same precise nanosecond?), a friend of Jay's knocked at the door to drop off some "homeless deer meat" (Jay's phrase). Apparently, they are venison tenderloins. We were given what looked like three hundred pounds of raw deer to me.
(Okay, a bit of hyperbole here.)
Back to my pristine kitchen. I thought my gravy was delicious, but it was far from my best effort ever.

Because everything around here gets eaten by...
a) people
b) dogs
c) chickens
d) The Cat
...I decided to save the gravy for dog food. When Jay finished helping clean up the kitchen (I only left the poor man an iron skillet and a few bowls), he stuck a styrofoam bowl full of my (perfectly fine) gravy into the freezer for Bama and Beau to devour over the next...I don't know...month or so.
A bit later, I opened the freezer and it smelled funky to me, so I removed said gravy and put it on the kitchen counter.
At 3:30 a.m., I awoke with an upset stomach (not from my most excellent cooking). When I opened the bedroom door, I was hit by a smell that was - I'm not sure how to describe it - apocalyptic? Horrible? Evil? Dante's Inferno?
I marched out to the kitchen area and shot accusing looks at both peacefully sleeping dogs.
This was bad, folks. The end of my kitchen.
Jay had placed the not-so-dear-deer in my precious large white crock pot. He came running in right behind me as soon as the smell hit his snoring nostrils.
I put my innocent gravy back in the freezer.
Jay put the smelliest venison in the history of the universe on the porch.
Fans were started.
Candles were lit.


Here's an easy way to make really wonderful dirty mashed potatoes:
Chop up about four cups of good little potatoes (I like Dole Yukon Gold) - just cut them into tiny pieces, and leave the skins on.
Place in a mid-sized glass mixing bowl and add about 1/3 cup of water, then cover TIGHTLY with clear wrap (it should look like a drum, and sound like one, too.)
Microwave on high for about eight minutes, until the potatoes are fork-mushy. DO NOT DRAIN.
Add butter, salt, pepper to taste (a little sour cream is wonderful, too.) Attack with an electric hand mixer.


*Every Southern Woman knows how to make this. Some people call it milk gravy. 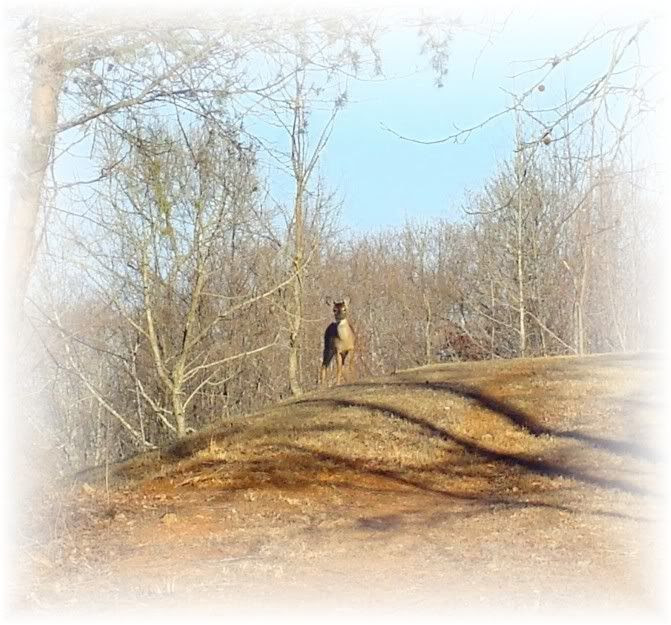 NOTE TO ANIMAL ACTIVISTS, PETA-TYPES, RABID VEGETARIANS, et cetera: THERE ARE NO DEER HUNTERS IN THIS HOUSE. WE DO NOT EAT OUR OWN (PET) CHICKENS. I don't even like to kill bugs.
Today I am going to play with the chickens, get my car washed, and visit my grandmother. Hope y'all have a wonderful weekend.
Love from Delta.
Posted by Beth Duke, Author of Delaney's People, Don't Shoot Your Mule, It All Comes Back to You, and Tapestry at Saturday, February 12, 2011