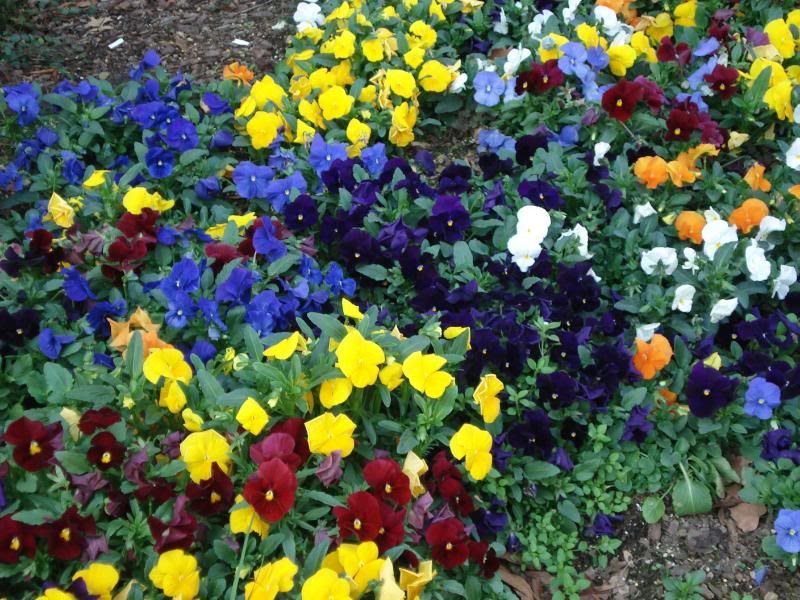 There are three things you should know about Montgomery, Alabama:
1. It is the home of Hank Williams. (The original Hank Williams - not the Bocephus variety. Hank was born 70 miles south of Montgomery, but he spent lots of time here, and rests here in peace.)
2. It is the place where Jefferson Davis took his inaugural oath as President of The Confederate States of America.
Sons of the South
3. The petunias are glorious right now.

Yesterday my husband Jay, our son Jason and I spent a beautiful day there. The sun was shining (it really felt like spring) and the skies really were SO blue. (I'm pretty sure our new governor is true, too.)*
*Sweet Home Alabama

We saw some amazingly beautiful sights, a lot of very pretty architecture, and we learned some cool Montgomery history. 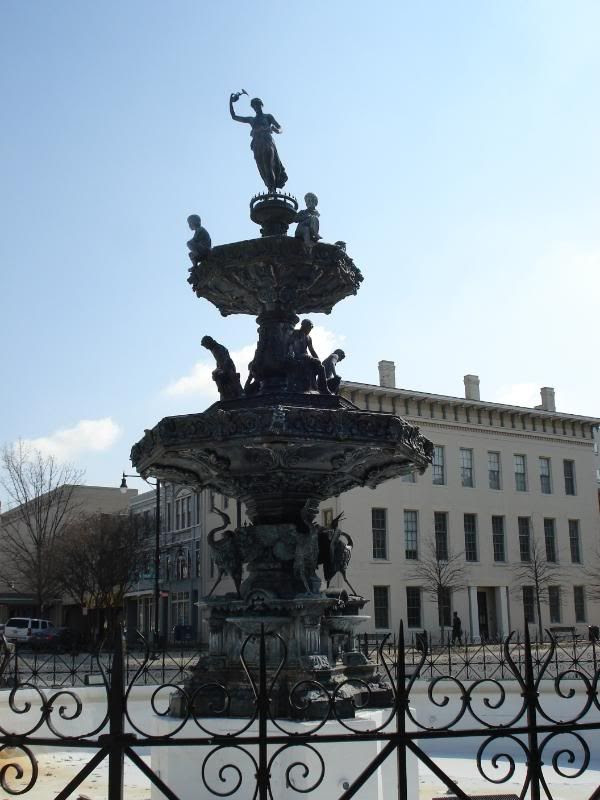 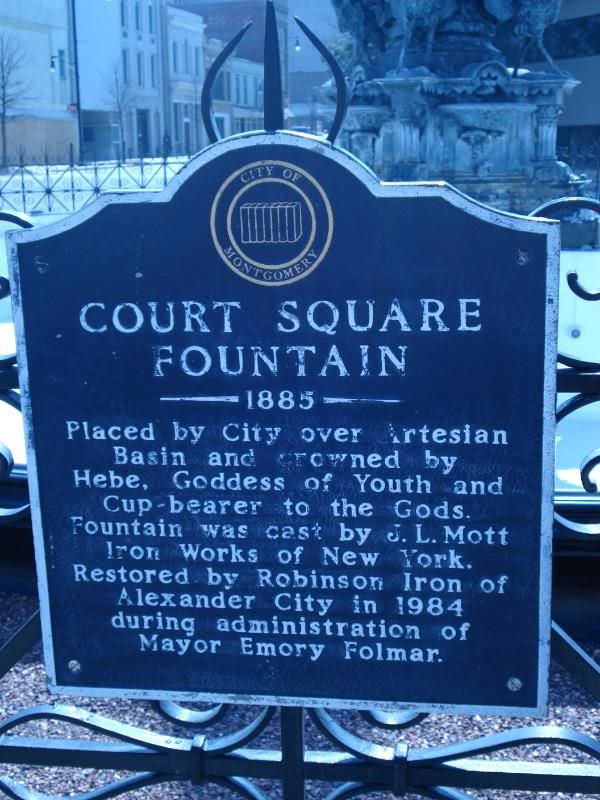 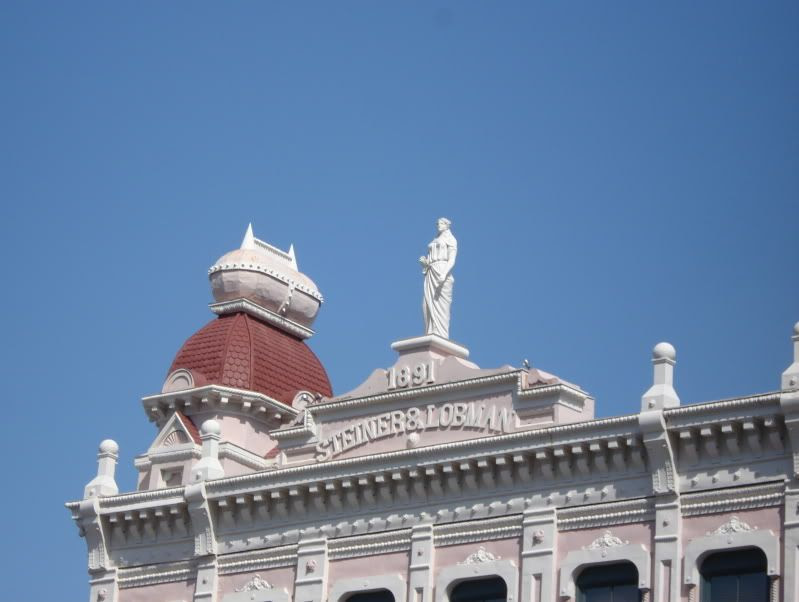 We were there...along with people from New Mexico, Oklahoma, Arkansas, Texas, Tennessee, Florida, Georgia, Kansas, The Carolinas, and other far-away places...to honor ancestors who fought in a war. We were there to remember 15-year-old boys and 20-year-old men from The South who were willing to fight and die for what they believed in. I talked to moms who dedicated their time to moving and preserving headstones. I talked to grandfathers who came to watch their grandsons march in a parade. 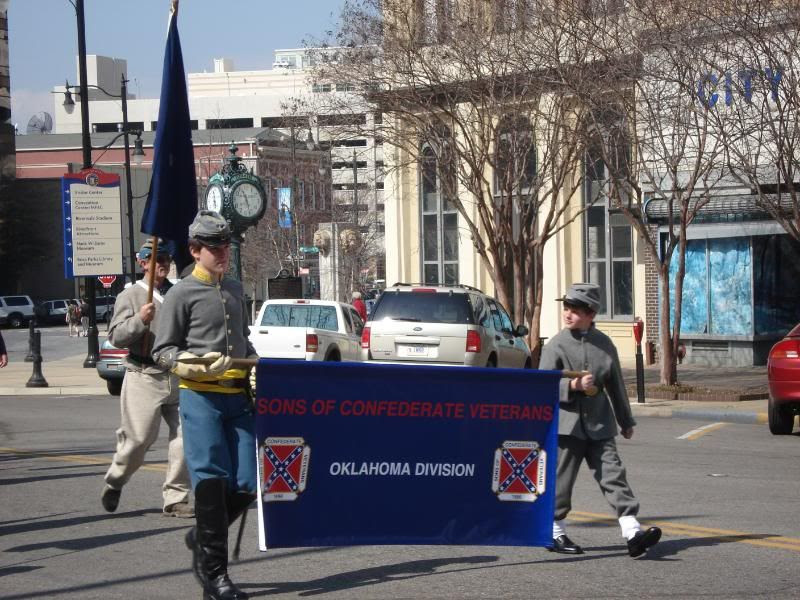 It's Confederate History and Heritage Month in parts of the South (we are marking the 150-year-anniversary of The War Between the States. (The Late, Great Unpleasantness. The War Against Northern Aggression. The Civil War.)
Other, more-politically-correct states no longer have such things.
(Alabama has its own, in April. Governor Bob Riley proclaimed it so in 2007.)
Confederate History and Heritage Month
Since Jefferson Davis was inaugurated on February 18, 1861 on the capitol steps in Montgomery, yesterday's Confederate Heritage Rally parade concluded in a re-enactment of his swearing-in. While Jay listened to that, Jason and I settled into a wonderful little restaurant called Chris' Hot Dogs. It's on Dexter Avenue, not far from the Dexter Avenue Baptist Church.
Chris' Hot Dogs
We were served delicious food by some very nice people. George Wallace's picture hangs on the wall. Ladies in hoop skirts jostled for position, trying to get a table. The place was packed.
There was no ugliness. There was no reason for it. People sometimes fail to understand that organizations like the Sons of Confederate Veterans exist to celebrate and preserve history, not for racial division or to spread hatred or anything else a nutcase can conjure up.
They honor war heroes, just like people up North should be doing for those who fought in the Grand Army of the Republic. Like this country does every time it marks Independence Day on July 4th. Like we do on Veteran's Day.
It's about tradition, respect, and honor.
Here are a few pictures from the parade: 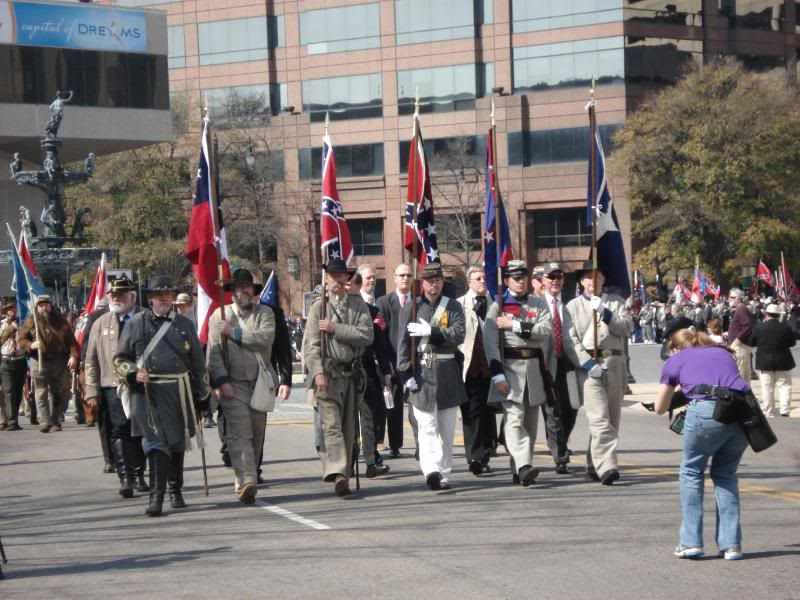 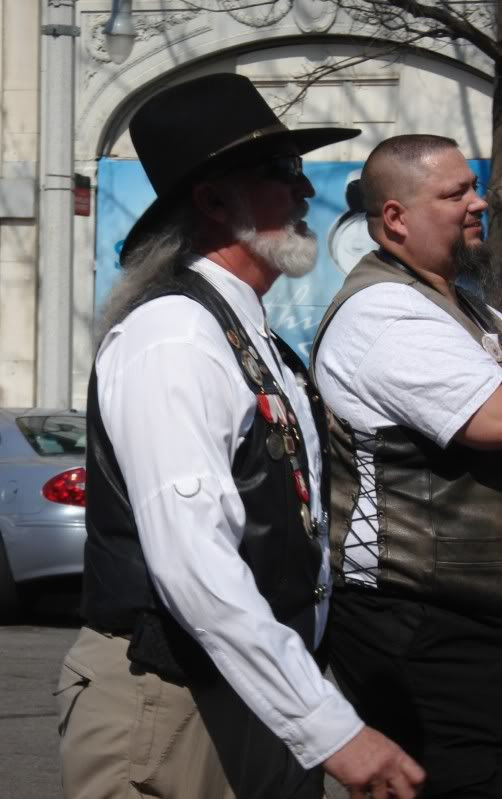 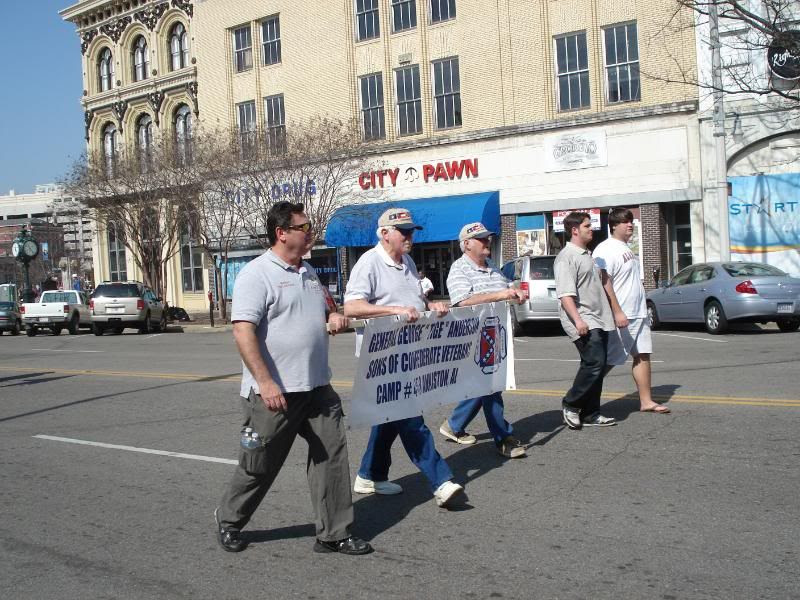 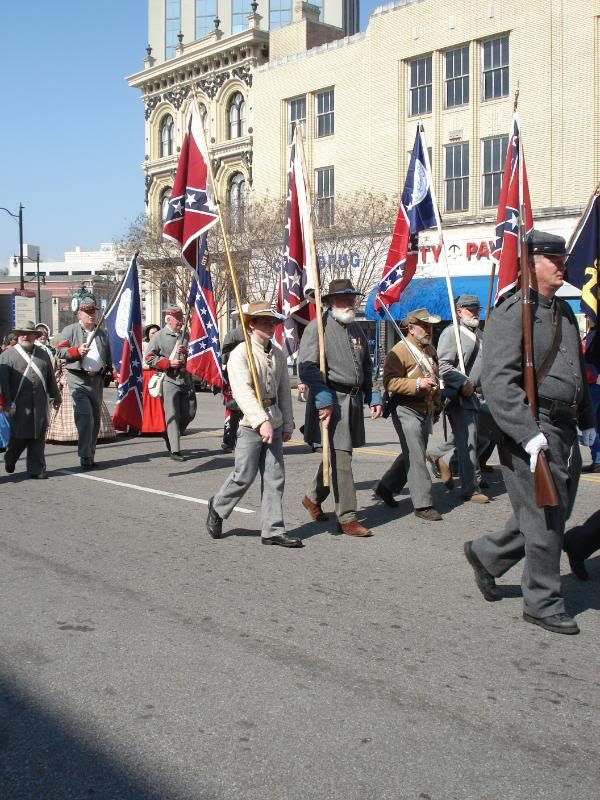 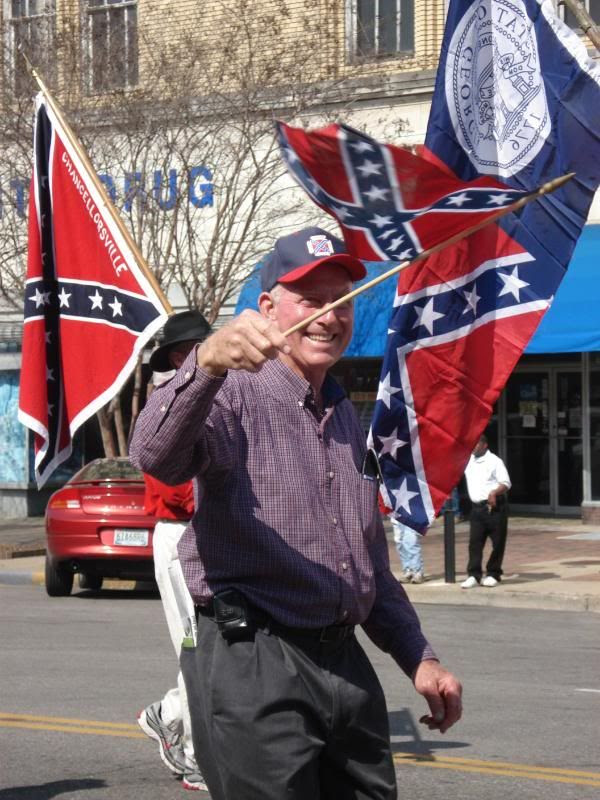 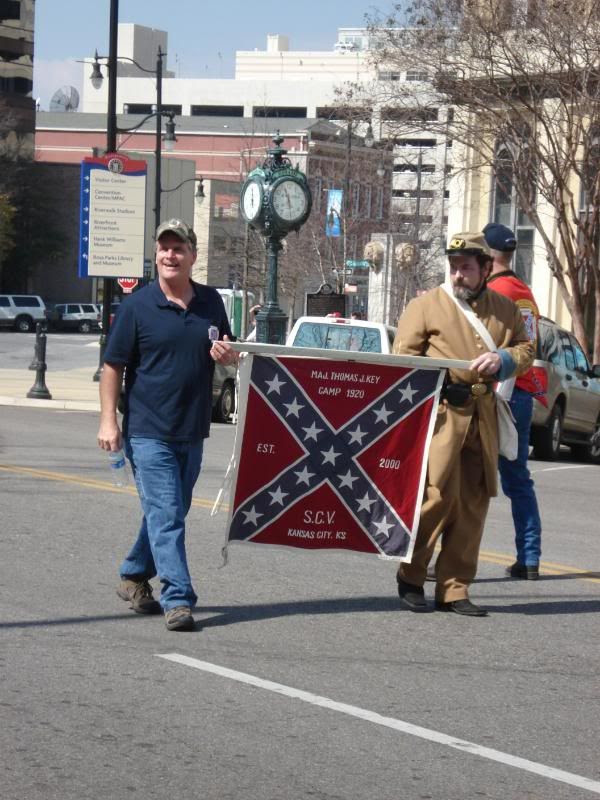 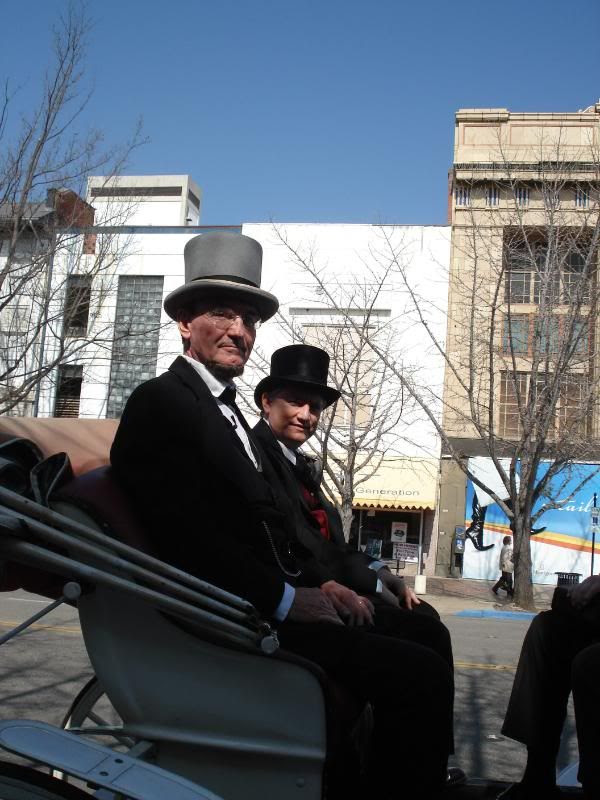 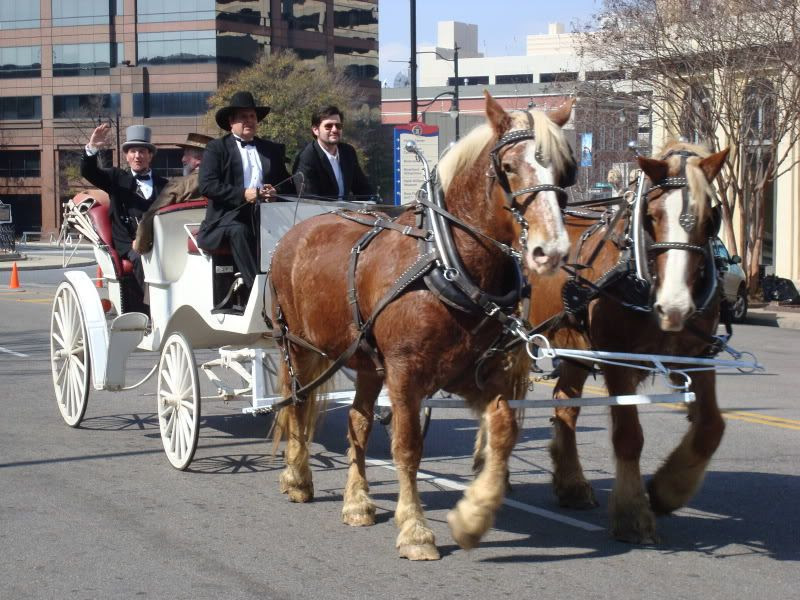 My nephew Duke shared a link to a clip of a Hank Williams hymn awhile back. While looking for it, I stumbled across this:
Hank Williams - "Lonely Tombs"
It's definitely worth a listen.
Happy Beautiful Alabama Sunday.
Love from Delta. 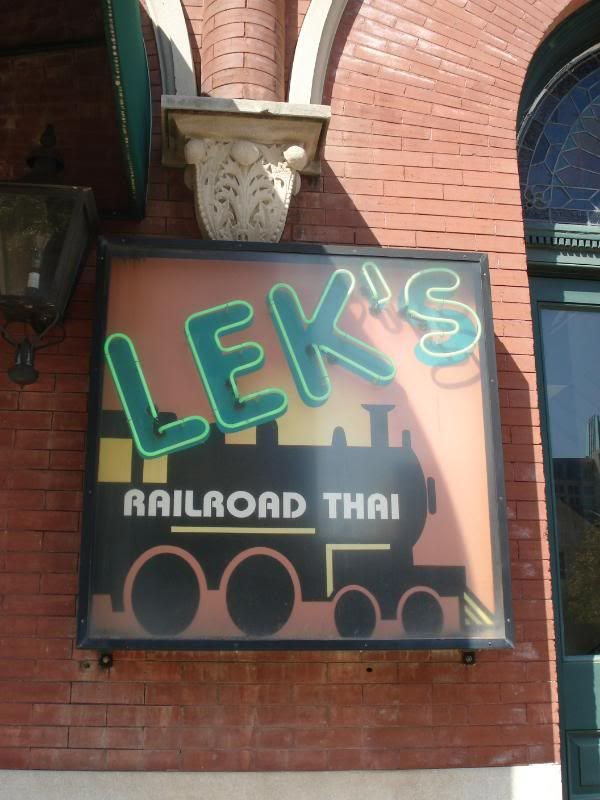 Posted by Beth Duke, Author of Delaney's People, Don't Shoot Your Mule, It All Comes Back to You, and Tapestry at Sunday, February 20, 2011